By admin8 czerwca 2020 No Comments

In the face of restrictions introduced by the authorities due to the SARS-CoV-2 pandemy, we decided to launch only one Operation Baltic field station in spring 2020 – Hel. The station Bukowo did not operate in spring this year. The fieldwork at Hel was conducted from 20th March till 19th May in a small team of BMRS staff and a few collaborators, in compliance with all formal regulations concerning hygiene and safety. Altogether we ringed 4393 birds, which is 114% of long-term average for Hel. Spring migration was clearly bimodal, with peaks in the first and third decade of April, of which the first peak was the strongest (476 ringed individuals on 7th April). The most numerous species, typically for Hel, was the Robin (2341 ind. ringed – 55% of the total number). We recorded also comparatively high numbers of the Blackcap (175 ind.), the Siskin (149 ind.) and the Dunnock (78 ind.), whereas the numbers of some early migrants (e.g. Great Tit and Goldcrest) were rather low – migration of those species probably culminated before the beginning of our fieldwork season.

Among 56 recorded species there were some quite rare at our stations, including the Pygmy Owl Glaucidium passerinum and the Grey Wagtail Motacilla cinerea. Four bird with foreign rings were caught – two Lithuanian Blue Tits, one Swedish Robin and one German Goldcrest. 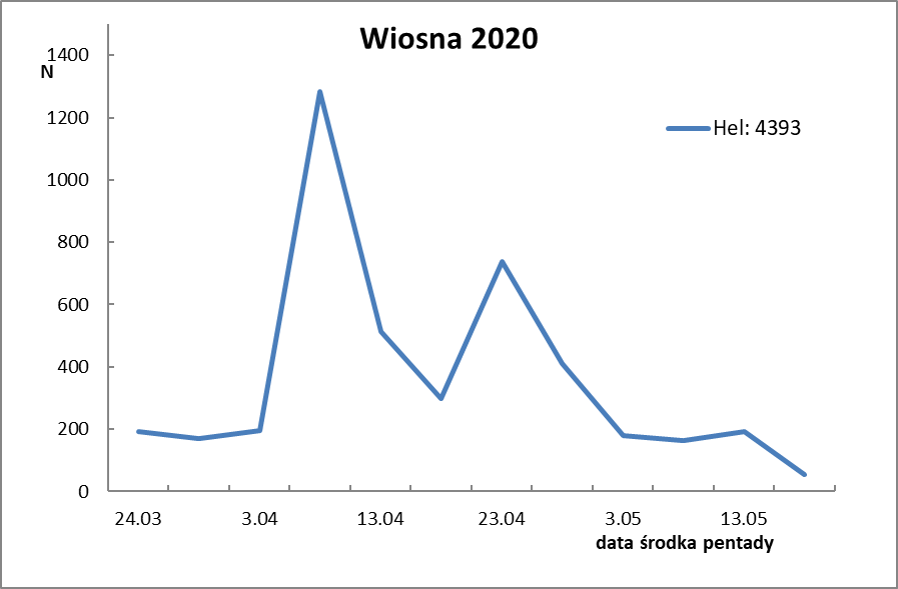 Grey Wagtail ringed on May 18th at Hel (photo: A. Pinszke)